Dealing with the farm animals 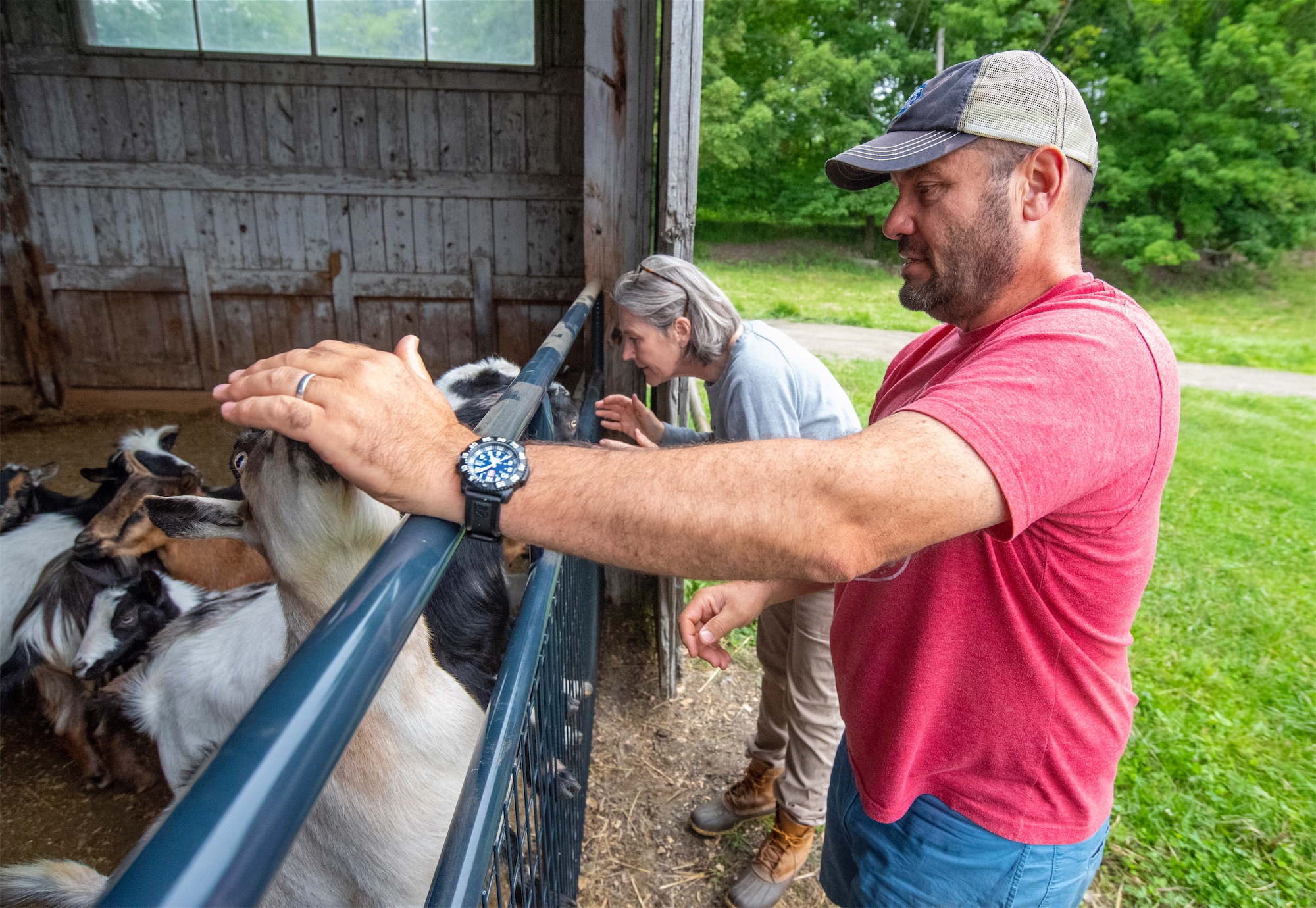 What kind of farmer was I? Really.

I asked myself this while sitting in the Montpelier Veterinary Hospital with a cat carrier at my feet. Instead of a cat, though, the green mesh rectangle held a tiny week-old piglet.

Should I be embarrassed? My image of a real Vermont farmer was a tough, unsentimental, practical business person with the ability to make the tough calls when necessary. And here I was, a flatlander, with a sick little piglet at my feet paying good money at the vet for what was probably a lost cause.

“There will be death,” our friends warned us when we bought a farm. They have about 50 acres in rural Maryland and own a collection of sheep, beef cattle, goats and several donkeys. In context, their animals are largely pets, so death isn’t as expected as it is when part of your business, like ours at Hollister Hill Farm, is selling meat.

Still, one of the reasons we changed our lives to run a farm is because we love animals.

Admittedly, I sometimes feel badly when I load an animal onto the stock trailer to deliver to the slaughterhouse, or processor, as the euphemism goes. I couldn’t do veal, the calves are too cute. And when our Jersey milk cows birthed a couple of steers in a row, people said Jersey meat was really good. But how could you eat something with eyelashes like that? And, besides, my daughters had already named them. You definitely can’t eat something you’ve named.

We have a couple of Angus calves in the barn now that we’re bottle feeding because they were born too small and couldn’t feed off their mothers in the pasture. Our daughters named one Herb, though I warned them not to get attached as the whole idea was to raise it until it was big enough to slaughter. Herb was born prematurely and when we found him in the field, he was too weak to stand and covered in writhing white maggots like swirling threads. We took him to the vet, too, (my daughter, Annie, held him on her lap in the truck) and against all odds, he survived and is now fat and happy. In my defense, beef is worth a lot more than a pig. But, still, is it just about dollars and cents?

In our previous lives as city folks, the only animal deaths with which we had to contend were squirrels and raccoons killed by vehicles, birds that flew into windows and one dog, the best black Lab ever, we had to put down when he was 12 and could no longer walk outside to relieve himself. We have a framed impression of his paw print and another frame displaying his collar and tags. His death was felt keenly and the road kill and the birds produced a pang of regret every time.

Most of the time when I take an animal for slaughter, I’m pretty dispassionate. The pigs are such a struggle to get into the stock trailer by the time they’re loaded and we’re sweating, panting and filthy, I’m feeling a little vindictive about their fate. The beef cows are kind of aloof, so there’s no time or opportunity to bond with them. Chickens also seem anonymous and are always dying for what seems like no reason at all, though I’m sure the reasons are acute to them. We like to say our animals have a really happy life and one bad day. This is mostly true.

When we first got to the farm, we had two large pigs die mysteriously overnight. We mostly felt the economic impact of two animals that were ready for slaughter and would provide a lot of meat for the store. The whole family rode on the tractor — kids on the fenders — like a funeral procession as we took the dead swine to the “animal graveyard” at the far reaches of the property where we left the carcasses to the coyotes and other scavengers just as the Lights, the farm’s previous owners, had for years. The kids were fascinated by the bones and my son, Finley, set up a game camera there to watch the action. So, maybe I’m overplaying their sentimentality, or using them as a screen for my own.

The piglet I had at my feet in the vet office had an inguinal hernia — an egg-sized lump of its intestines protruding from its abdomen. It wasn’t our first rodeo with pig hernias. When we took over the farm, we inherited a herniated piglet about two months old. She seemed happy and healthy so we treated her by wrapping her abdomen with an Ace bandage, but her littermates pulled on the bandage and we found her trailing it around the pen like a disgusting snake-like growth. The hernia refused to retract and it grew so that once she was three months or so, it was the size of a honeydew melon, which is a lot on a 25-pound pig. Something had to be done. There was no repair possible and many slaughterhouses won’t take a pig with a hernia because of the possibility of rupture and meat contamination. Greg Light, the former owner’s son, offered to shoot the piglet for me, but I said I would do it because I really felt it was something I should do myself.

Greg brought me a deer rifle. He said I should shoot it outside. The barnyard was covered with a white blanket of fresh snow. Because I treated the piglet, it got to know me and unlike its littermates that scurried and squealed when I entered their pen, she didn’t resist when I came for her. She trusted me. I took her to the barnyard. I put a handful of grain at her feet to keep her busy and she looked at me with what seemed like gratitude. She not only trusted me, but maybe she even liked me. I placed the muzzle on her forehead between her eyes and pulled the trigger. It was too much gun and the result wasn’t pretty. After we removed her body, there was a large red stain in the barnyard. It didn’t snow again for a while so I was forced to look at it for a week or so.

Catherine, my wife, was worried the incident traumatized me. It didn’t, though I can still feel the recoil of the gun in my teeth and see the aftermath. That’s why we didn’t wait to take this second herniated piglet for treatment — I didn’t want to be put in that position again. Catherine and I agreed on a firm $150 limit for its care.

After examination, Dr. Goucher took the piglet into another room and she and a colleague pushed the piglet’s intestines back into her abdomen. Dr. Goucher warned me they might pop out again so Catherine and I bought an elastic fabric knee brace at CVS and cut four slots for the piglet’s legs. We fought her into her improvised truss and hoped for the best. We were proud of the truss but somehow she or her littermates pulled it off overnight so we worried she was a lost cause. Our investment was $60 for the vet and $15 for the bandage. Oh, well. We tried.

Turns out, though, that the hernia stayed retracted. The piglet, which we regularly catch to check its progress, is fully healed and will live to either breed more piglets or provide meat for the store.

Yes, death is an inevitable and constant part of farm life but this time, our softness paid off. I’m not embarrassed, and now we have a good precedent for how we’ll care for our animals in the future.